The latest addition to the works of successful author Alice Hoffman, this novel describes a young woman’s struggles to find her way back into life after being the driver in an accident that left her best friend braindead. When the horrible tragedy occurred, Shelby, our protagonist, was just 17 years old. She and her best friend Helene had a promising future ahead of them – they had plans. But with Helene’s future obliterated forever, Shelby has trouble coping with the fact that she still has a life ahead of her. 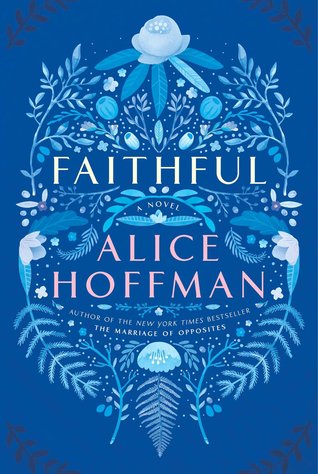 The first chapter lays the foundation for the rest of the novel by giving us glimpses into that troubling period in Shelby’s past – the night of the accident and its aftermath over the two years that follow it. This chapter serves to introduce Shelby as a deeply troubled character dealing with various psychological issues and with more than one traumatic experience to recover from. As such, it deals with several really heavy and dark themes and this is also where my dissatisfaction with this novel begins.

The way these sensitive issues were treated just didn’t sit right with me – in hindsight Shelby’s diagnosis in the first chapter felt like a shopping spree in the department of mental health issues. It’s not a matter of quantity. It doesn’t have anything to do with her dealing with numerous issues.

It’s a matter of quality. It has everything to do with the fact that it feels like all these traumatic experiences and their psychological consequences are quickly rattled off in the first chapter and then never properly dealt with.

Some of their aspects and “side effects” are mentioned in passing again and again – like how Shelby feels worthless or how she shaves her head. BUT these things are only mentioned every couple pages to serve as a reminder that they are there in the first place – because over long stretches of the novel they don’t seem to have any impact on the story or the characters in it other than determining Shelby’s appearance. This might explain why I felt like Hoffman was using mental illness like a fashion accessory – for the sole purpose of giving her main character a certain edge. I seem to have missed the memo announcing that suffering from depression makes you cool.

Unfortunately that wasn’t my only problem with the characterization of the protagonist. For me, Shelby comes across as a bit of a Mary Sue character – she doesn’t seem to have any serious character flaw. Instead she’s basically a saint – saves mistreated animals, is the best boss ever, best student ever, rescues people, protects children etc.
Going by these actions, Shelby is practically perfect. Aside from the fact that we’re told repeatedly that she’s not – or rather that she’s a very troubled character. I just felt like someone was shoving a perfectly yellow banana in my face and telling me “Bananas are purple” at the same time.

But Shelby doesn’t even necessarily need to act. Things are done for her. Things happen to her. Things just magically fall into her lap (example: job).

Some events and passages in the story felt so unrealistic and cliché that I couldn’t help but scoff and shake my head at them (example: meeting Harper).
You know, when I was about 13, there was this girl in my class who, judging from the stories she told, had the most interesting life any 13 year old ever had. I will never forget the story about how she was walking through the city the day before, looking at something and not paying attention to what was in front of her, when she walked right into a handsome stranger, which made both of them trip and fall and, naturally, had her landing right on top of him. And of course, he also asked her on a date right away.
I mean, hey, I’m sure we all wished our life was a rom-com at some point. Telling me that story was her wish fulfillment. And in more than one way, Faithful felt like Hoffman’s wish fulfillment to me.

This impression was further strengthened by leaps in time which I would even define as plot holes. They make it seem as if things magically fix themselves overnight because the parts in which the healing & learning (and therefore the character development) takes place are conveniently skipped.

The following quote comes right after one such leap and the listing of the changes which took place in the meantime:

And that’s exactly how I felt about these changes. It was all just too easy, too sudden and too without an explanation.
Similarly, I sometimes found myself surprised by the sudden re-appearance of certain plot lines after they hadn’t been mentioned for such long stretches that I had almost forgotten about them again (example: postcards). Overall, that made the plot feel a bit all over the place for me.

At less than 300 pages, Faithful is a rather short novel which nonetheless attempts to chronicle a very difficult journey to healing spanning several years and involving a good number of different characters and relationships, events and plot lines.  It’s not surprising then that some of them don’t get the necessary attention.

I would have liked this novel much better if Hoffman had focused on one of the plot lines and relationships and cut others instead. The one part I actually liked was the relationship between Shelby and her mother. For me, it was the only part which had emotional depth and therefore great potential as well.
Unfortunately the multitude and nature of the other story lines drowned out the profound effect it could have had.

Obviously, this novel wasn’t for me. I wasn’t able to relate to the characters and thought they lacked authenticity – especially the main character. There was just too much going on for such a short novel, which made the plot feel messy and, for the most part, lacking emotional depth. Plot holes only reinforced that impression. The treatment of mental health issues seemed superficial and even problematic in some ways.

However, I’ve read other reviews of Faithful and they are all very positive, so maybe I just don’t understand Hoffman’s style. This was also my first novel by Alice Hoffman, so I’m hoping we just got off to a bad start. I will definitely give her other novels a go.

[*I received this book as a digital ARC from the publisher via Netgalley in exchange for an honest review.]

Have you read this book? What did you think? Are you planning to read it?
Have you read any other of the author’s novels?
Tell me in the comments!